In 1911 he entered the Royal Military College of Canada. At the outbreak of World War I, he left the academy and enlisted in the cavalry weapon, joining the Mississauga Horse Cavalry Regiment. However, pneumonia prevented him from traveling to Europe with his unit. After recovering he was assigned to the 7th Canadian Mounted Rifles, with which he traveled to England in a convoy that was attacked by German U-Booots. However, Bishop's boat was not damaged.

He began the war with the Canadian Expeditionary Force in the trenches, where he was soon frustrated by dirt, mud and lack of action. In July 1915 after seeing a plane return from a mission, he requested and was granted the transfer to the RFC (Royal Flying Corps, as the RAF was known at the beginning of the war).

There were no vacancies for fighter pilots in the Netheravon Pilot School at the time, so he trained as an observer. It turned out to be such a good aerial photographer that he was responsible for training other observers in the technique of aerial photography. Eventually in January 1916 he returned to France, near Saint-Omer. During the following months he carried out numerous observation and bombing missions, but never used his observer machine-gun. One day when landing he suffered a serious knee injury, and spent a lot of time recovering in London and Canada. This wound prevented him from participating in the Battle of the Somme, the bloodiest battle of the entire war.

Returning to England in September 1916, he managed to be admitted to the Central Flying School in Uphavon, where he finally got his pilot wings in November 1916. He was assigned to the 37th Squadron of the RFC, making night flights over London in search of German airships. As he disliked these duties, shortly after he requested to be transferred to France. In March of 1917 he arrived at Filescamp Farm, near Arras with the 60th Squadron of the RFC, where he was assigned a Nieuport 17. At that time the survival rate of a new fighter pilot was in 11 days, and the Germans shot down Allied planes in a 5 to 1 ratio.

His beginnings as a fighter pilot were quite disastrous: In his very first mission he was about of being shot down by the German antiaircraft artillery, and shortly after he crashed his aircraft when landing in front of a group of officers. He was ordered to return to England to improve his piloting skills. The next day, and before returning, he shot down his first enemy aircraft, an Albatros D-III, which saved him from returning to England. Shortly after he was promoted to captain.

Along with missions with his squadron, Bishop used to carry out solo missions entering deeply behind the German lines. This allowed him to considerably increase his victories (although because he was alone, many of them without witnesses that accredited them). When he achieved 5 victories his mechanic painted blue the nose of his  Nieuport, a mark of an ace.

Bishop's leadership style led him to lead the formation, distinguishing him from the others. He soon realized that the enemy would focus on him (his mechanic counted 210 bullet holes in his plane after a mission). In this way, the system changed by a surprise attack, which was very positive in the results.

In April of 1917 his squad had an encounter with Manfred von Richthofen’s Jasta 11. In May he was awarded the Distinguished Service Order.

Shortly after Bishop with 17 accredited victories and decorated with the Military Cross and after a short stay in England, planned a surprise solo attack against a German airfield at dawn. Thus, on June 2nd, 1917, at 03:57 in the morning, he took off with his Nieuport 17 with tail number B1566 from his base of Filescamp Farm. He crossed the enemy lines and found an abandoned German airfield. After searching, he found out a second camp in Esnes where at dawn they were preparing for the missions of the day.

Bishop attacked by surprise although under a thick anti-aircraft fire. In total he claimed to have destroyed three German aircrafts that were taking off to take him down and some others on the ground, having to return avoiding the German patrols since he had exhausted his ammunition. At 05:40 in the morning he was back at the base.

For this action, on August 9th, 1917 he was decorated with the Victoria Cross, the highest British military decoration (and by that time of the countries of the British Empire, such as Canada). His Victoria Cross is the only one granted (along with that of the unknown soldier) without witnesses of the awarded action.

The decoration caused his transfer: he was appointed in England as an instructor for new pilots. He left 60th Squadron with an overall of 50 confirmed victories. 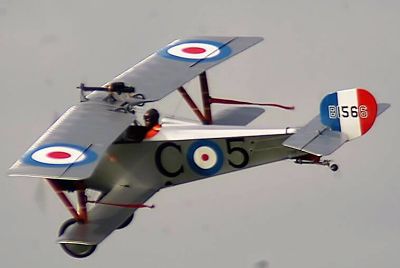 In May 1918 he managed to return to action n France: Promoted to Major he was given the command of the 85th Squadron, equipped with the modern S5as, but the fast increase of his victories made him fear that he would be transferred back to England soon: his death would likely have a negative effect on the morale of the Allies And so it happened: finally on June 18th he was ordered to leave France and was assigned to the RCFC (Royal Canadian Flying Corps) set up.

In total he was credited with 72 victories, being the third pilot with highest number of victories, to Mandred von Richthofen and the French René Fonck, and the first of the British Empire. However some recent research by historians questioning Bishop’s figures, state that many victories were not accredited by witnesses, and that the allied propaganda increased its number artificially.

It received the Distinguished Flying Cross, as well as the Légion d'Honneur and the Croix de Guerre avec Palmes from France. After WWI, he started a career in business, founding important aviation companies in Canada. At the outbreak of World War II, he rejoined the service as General of the Air, carrying out an extraordinary work in the recruitment of pilots for the RCAF (Royal Canadian Air Force). However, in 1944 he had serious health problems and withdrew from the service. With the outbreak of the Korean War, he offered again for the service, but was kindly rejected for health reasons. Finally he died in Palm Beach, Florida on September 11th, 1956. The second airport in Toronto is named after him.